Samsung Gear’s are wearable watches produced by the Samsung Electronic. This product was first introduced with an Android Smartwatch, in September 2013. It expanded at the Mobile World Congress, with a successor- The Tizen based gear 2, and Gear Fit activity tracker. 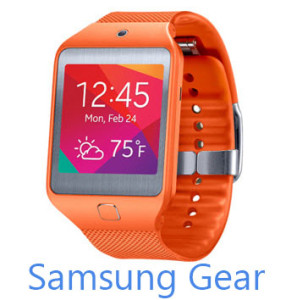 The Samsung Galaxy Gear is part of the Samsung Gear family devices. It was unveiled during the September 4th, 2013 Samsung’s Unpacked event in Berlin, Germany. It serves as a companion for every Samsung Galaxy tablets and phones, running the Android 4.3 or newer versions. On May 2014, Samsung made an update and replaced Its operating system with Tizen.

Gear 2 was the successor of the Samsung Galaxy Gear. It was unveiled on February 22nd, 2014 at the Mobile World Congress. There was no big difference made in it, the only difference was that they made a replacement of the Android with developed Tizen by Samsung. This upgrade came with better features as they promised, like battery life, music player and the Samsung’s S Health software. Its design was also refreshed by Samsung, with the move of its camera, from wristband to the watch itself, (which allows users to replace their own bands) with an optical heart rate sensor and infrared blaster.

Gear 2 Neo is also a successor to the Galaxy Gear. Same as the Gear 2, Gear 2 Neo also had an upgrade by Samsung, removing the Android operating system, and replacing it with the Samsung Tizen. This upgrade helped to add more functionalities to the Smartwatch. They also added features such as the Samsung S Health software, and the integrated music player, with improved battery life. Its design was also refreshed, giving it a new look. The Gear 2 Neo also comes with the infrared blaster and the optical heart rate sensor.

Gear Fit is another device of the family of the Samsung Gear’s, featuring a curved AMOLED display. It is designed to appeal to those interested in fitness and style. Its applications make it easier to monitor fitness activities-

This Smartwatch is focused on health and is smaller and lighter than the Gear 2 and Gear 2 Neo.